As you know, EuropeBus.co.uk provides information about regular shuttle services to and from airports in the UK. This time, however, the airport is outside the UK, namely, in Bergamo, Italy. There, Terravision coach operator has launched a new link between Bergamo Airport and Milan.

From the 24th May, all travellers easily and quickly will be able to travel between the airport of Bergamo Orio al Serio Airport, via Cologno Monzese, to Milan city center. In what way? With Terravision coach. This is the low cost, high quality airport transfer, from just €5.00 one way. The journey takes approximately 60 mins and is the cheapest and most cost-effective way for visitors to reach the centre of Milan.

Timetable & fares: The first Terravision coach will depart from the airport at 4.05am and from Milan at 2.50 am. The timetable is arranged so that the coaches will depart every 20 minutes during the day and less frequently at night. The last coach will depart from Bergamo Orio al Serio Airport at 01.00am and from Milan Central Station at 22.10 pm.  The timetable has been thoughtfully considered and calculated to cover the majority of flights arriving and departing from Bergamo Orio al Serio Airport, providing passengers with frequent transfers, enabling them to reach the airport exactly when they need to. Prices for the service are fixed at €5 per adult one way. A return fare for adults will cost just €9.

“The new service provides passengers with approximately 42 departures daily and is the most cost effective transfer service from Bergamo Orio al Serio Airport to Milan Central Station.  As a company, Terravision aims to provide a high quality transfer service at the lowest possible price.  This service offers exceptional value for money, including complimentary travel for children under five years old.  Since the advent of European low-cost travel, Terravision has established itself as a leading provider for shuttle buses travelling between airports and their respective cities throughout Europe.  Our coaches are equipped with modern facilities and are both comfortable and reliable.” 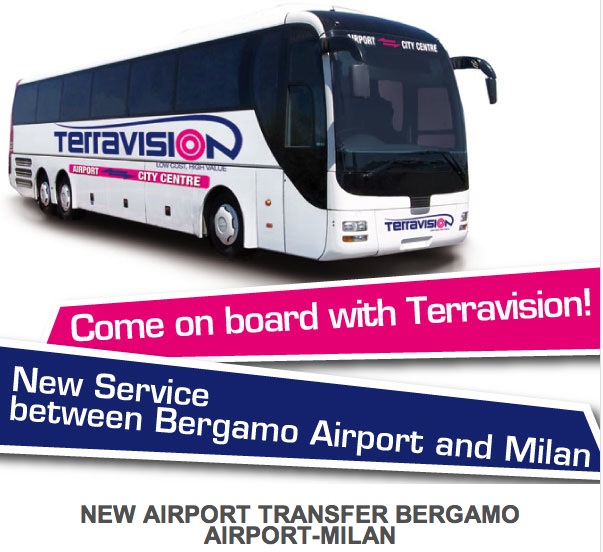