Only National Express provides direct inter airport coach service between Luton Airport and Stansted Airport (Luton to Stansted).There is no other coach or train operator, which offers similar shuttle service between these airports. National Express offers up to two coaches an hour  (about 25 services) per day in each direction. Coaches that serve this route are not intended to serve the route from Stansted to Luton only, the coaches run on larger distances and both airports are only intermediate stops. Most of the services begin their journey at one of the UKs’ cities or towns, however, on the route between Stansted and Luton they stop at these stops (see table below). The National Express direct coach lines between Luton Airport and Stansted Airport are 737 and 777. National Express’ coaches that shuttles between these two airports use two routes: through Hitchin and Stevenage, or through Hatfield or Herford. There are also few indirect routes between these airports, which require connecting at London’s Victoria Coach Station (but during nights only). The National Express Bus/Coach Shuttle mostly reaches to all terminals at both airports. Travelling between airports with National Express takes 80 to 90 minutes. 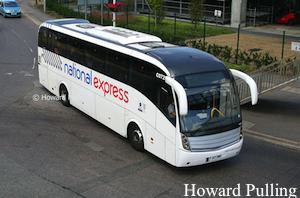 National Express coaches are high-class vehicles, equipped with toilet, air conditioning, reclining seats and radio. This carrier puts the safety and comfort of passengers in the first place, so the vehicles are equipped with a large number of safeguards. National Express uses modern vehicles with large panoramic windows and increased legroom.

Everyone arriving at Stansted Airpot or Luton Airport may use the carriers’ services, regardless of the type of air operators. National Express services can also be used by your family, friends and colleagues who want to greet you or say goodbye to you at the airport.

Please double-check coach times for your dates of travel at nationalexpress.com

How to buy tickets online for travel from Luton to Stansted?

To purchase tickets online you can do it directly at the Europebus’s home page using a journey planner provided. You can also do it on the National Express website. Simply fill out all fields in the journey planner and follow the instructions to buy a ticket. One-way „Standard” travel ticket from Stansted to Luton costs about £14, Discounted tickets are also available for youths, children and seniors. Early booking is highly recommended, because the National Express’s route between Luton Airport and Stansted Airport is very popular and the coaches are fully booked on some days. Buy ticket online

What if my flight is delayed?

National Express tries to be helpful in such situations. If a passenger is late for the coach service from Stansted or Luton, National Express drivers will allow passengers to use the next connection. It is not mandatory, the driver has no obligation to do so if the coach has no free seats. In the case when a passenger is delayed and the driver will not allow to enter the coach, passenger should go to the National Express’s service center and explain the situation. Ticket for the connection will be changed by the agent. It is possible that a fee will be collected.

The coach driver will load and unload customers’ luggage but customers are responsible for seeing their own luggage onto and off the coach on which they are travelling. Each customer has a free luggage allowance of two medium sized suitcases, weighing no more than 20 kilograms each and 1 piece of hand luggage, which must be located on the shelf above your head or under the passenger seat.   Buy a ticket online

Overview of alternative transports between Stansted Airport and Luton Airport

The best way to protect against unexpected accidents is to buy travel insurance. In my opinion, that the journey was stress-free, you should never travel without travel insurance. You can insure your journey with National Express, it’s possible directly on the National Express website, during ticket purchase.
You can also insure individual with another insurer. This will be the insurance that will apply during the journey and while in a foreign country. The insurance should cover: loss of cash and goods, cancellation of travel and the main treatment abroad. If you travel several times a year and want to save money, you may want to buy an annual insurance policy. Click here to buy an insurance.

On our  Accommodation page you can book a hotel room or place in a hostel. This is the online hotel reservation system, easy to use. With this tool you can choose from thousands of hotel offered all over the world. You also save time and money because you do not pay intermediaries.