Bus to Bradford from London by National Express and Megabus 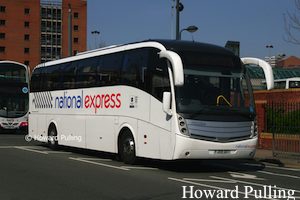 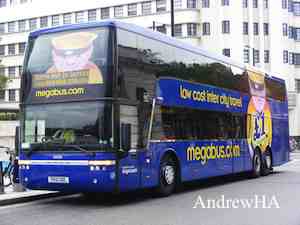 Megabus bus from London to Bradford

M34 is the Megabus direct line from London to Bradford, however, Megabus offers also other way of travel between the two cities - Megabusplus is a coach and train combination with coaches operating feeder services from locations in Yorkshire and East Midlands Parkway railway station where passengers transfer to an East Midlands Trains service to/from London St Pancras. Unlike Megatrain, this service is available daily. When engineering works disrupt rail services between London and East Midlands Parkway, the service is run using direct coaches from London Victoria.
Most of the services from Bradford to London begin their journey at one of the UKs’ northern cities or towns, however, all terminate at Victoria Coach Station in London (see details below).
National Express & Megabus’ coaches are high-class vehicles, equipped with toilet, air conditioning, reclining seats and radio. Both carriers put the safety and comfort of passengers first, so the vehicles are equipped with a large number of safeguards. The operators are using modern vehicles with large panoramic windows and increased legroom. Some coaches on this route provide free Wi-Fi and can take passengers in wheelchairs on board the bus.
Travelling between London and Bradford with National Express takes about 5 hours, 4.5 hours with Megabus and Megabusplus. This is one of the cheapest transport options between Central London and Bradford.

Bus to Bradford from London by National Express

Bus to London from Bradford by National Express

Bus to Bradford from London by Megabus and Megabusplus

Bus to London from Bradford by Megabus and Megabusplus

How to buy tickets online for travel from London to Bradford?

To purchase tickets online for National Express routes you can do it directly at the Europebus home page using a journey planner provided. You can also do it on the National Express website. For Megabus connections visit Megabus website. Simply fill out all fields in the journey planner and follow the instructions to buy a ticket. Discounted tickets are also available for youths, children and seniors. If you book early and your travel dates and times are flexible, you may get ticket with a discount. Early booking is highly recommended, because services between London and Bradford are very popular and the coaches are fully booked on some days.

Luggage policy for the National Express bus to Bradford: The National Express’ coach driver will load and unload customers’ luggage but customers are responsible for seeing their own luggage onto and off the coach on which they are travelling.
Each customer has a free luggage allowance of two medium sized suitcases, weighing no more than 20 kilograms each and 1 piece of hand luggage, which must be located on the shelf above your head or under the passenger seat. >>> NX's BUS TO BRADFORD on-line booking <<<

Luggage policy for the Megabus bus to Bradford: Megabus doesn’t check luggage or provide receipts for luggage transported on the bus by the passenger.  Passengers are advised that Megabus will accept up to one piece of luggage per passenger. For guidance this should be no more than the size of a standard suitcase and should not weigh more than 20kg.  Passengers can also take on board one small piece of luggage that must fit either on your lap or under the seat in front of you. >>> Megabus BUS TO BRADFORD on-line booking <<<

Overview of alternative transports between London and Bradford. Trains & airlines services within the UK.

If our information is insufficient for you to convince you to travel by coach, or simply you don’t like this transportation arrangement then we encourage you to take advantage of rail or in some cases flight services. If you want to travel for example from London to Bradford or vice versa by train we suggest you to visit the Train Line website while good flights between British cities are recommend on the Budget Air’s website

Rail services in the UK are fast, frequent and convenient. Tickets can be bought in advance easily via a train reservation service available at the Train Line website.
Regular air links to distant cities in Britain can be checked and booked at www.budgetair.co.uk. Flights connections are available to various destinations in the UK, Europe and worldwide.

If you need a car abroad, please use the information provided on Rent a car page. There you can rent a car online with proven rental agency located throughout Europe. You'll save money because you don't have to pay commission to the agent. Car hire online

On our  Accommodation page you can book a hotel room or place in a hostel. This online hotel reservation system is easy to use. With this tool you can choose from thousands of hotels, offered all over the world. You also save time and money because you do not pay intermediaries.